GEWA UK. Associated Independent Electrical Wholesalers (AIEW) held its 2017 Trade Show and Dinner at the Crowne Plaza Stratford upon Avon on the 7th of October 2017.

AIEW and members gathered at the Crowne Plaza – Stratford upon Avon for this year’s AIEW Trade Show. This year 49 trade stands were representing AIEW’s partner suppliers. With a variety of competitions, prize draws and on the day offers, stands were busy and business was bustling. 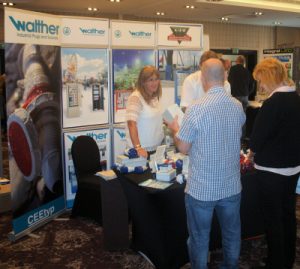 As always the AIEW Trade Show was all about bringing Members and partner Suppliers together away from the day to day pressures of the Trade Counter and allowing Suppliers to showcase the latest product developments and build better business relationships with AIEW Member wholesalers.

David Dunning (AIEW Chairman) welcomed the assembled guests and raised a toast to the Suppliers thanking them for their support both at this event and throughout the year.

The feedback this year has again shown the event to be very effective with Suppliers impressed with the orders placed and AIEW Members’ positive and interested approach at their stands and throughout the event in general. 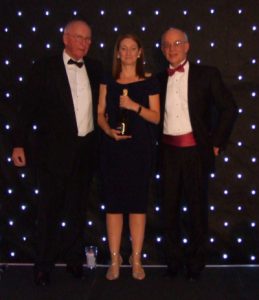 Andy Gardner (AIEW´s Chief Executive and Board Member of GEWA) was the Master of Ceromonies for the evening.

He announced AIEW’s Partnership Award given to the Supplier that has done the most to push forward the partnership between themselves and AIEW’s Members, won this year by Bell Lighting.

Finally, the AIEW Supplier of the Year Award, voted by AIEW Members only and takes into consideration price competitiveness, field and after sales support, stock availability and product quality.
This year the Award was for Ansell Lighting.